I have mentioned a few times through this series that I used to work at Cold Side Silkscreening ( www.coldside.com ). Cold Side has been printing t-shirts in the warehouse district of Minneapolis since 1976. It's been seriously struggling over the last few years and is in danger of going under.
It's a pity because the two men who own it are decent fellows who try to do well by their employees. They've never been the best businessmen, but they've tried. I'll do a separate blog on Cold Side soon.

Over the years, Cold Side employed many people who were in bands. I'm not sure why, but Cold Side just seemed to attract the musically inclined. A partial list of the local bands with members who have worked at Cold Side: The Yoleus, TV Sound, All the Pretty Horses, Guzzard, Charlie Don't Surf, Dander, Grand 80, Sic Bay, and The Murderers. There are more, but you get the idea.

It's possible that you might have heard of one or two of them, but probably not most of them. I will elaborate on those bands which I have actually seen play... 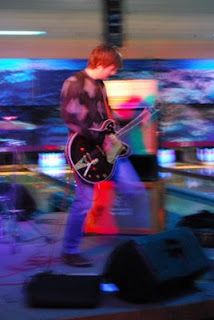 This band featured former Cold Sider Dave Erb (pictured above with his current band The Yoleus). Dave worked in the office when I first started in the art department. Dave was such a mild-mannered person that it took me by surprise to learn he was in a band. He just didn't seem the type. However, he is an excellent guitarist. He's even on my list of my all-time favorites.

Dave's band mates were Bill and Moira Beeman. Bill had previously been in the band Vertigo, which was on the Amphetamine Reptile label. Bill may have worked at Cold Side, but I'm not sure. Bill's brother Tom did work at Cold Side and he was in the band Guzzard, also on the Am. Rep. label.

The name Three-Way Grady came from another former Cold Sider. The band members asked him if he could come up with a name for the band. He presented them with a list of possibles and they picked Three-Way Grady.

So, I ventured out to First Avenue to see the band play the Entry. I was quite surprised when quiet, unassuming, mild-mannered Dave began shouting out the lyrics to the first rocker of their set. Bill did most of the vocals, but Dave kicked off the night singing the first song.

Three-Way Grady produced a few DIY singles and tapes, played a few gigs and then broke up. Dave went on to another band called Sic Bay. They were a more experimental rock band that got voted Best New Band in the City Pages' annual Best of the Twin Cities edition in 2004 or 2005 or 2006, I forget. Shortly after receiving that accolade, Sic Bay broke up.

Dave is now performing with an instrumental band called The Yoleus and in another sort of band called Crawdad Creek. Crawdad Creek is the "band" that I play lousy rhythm guitar for and I will talk more about them in a later blog. 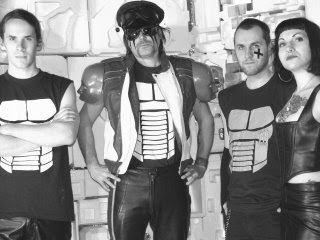 This was former Cold Sider Mark Howard's band. It was a two piece band when Amy and I saw them. Mark was guitar, keyboards and vocals with his friend playing bass. They played with a tape filling the rest of their sound.

They played a kind of space age Gothic electronica thing with a little 80's new wave pop thrown in. They wore spacesuits (sort of) and makeup to give an otherworldly effect. Mark also used the special effect of putting a firework in a gap behind the strings on his guitar. It was similar to a firecracker, but, instead of exploding, it would flash and smoke. So, at the proper moment, Mark would light the fuse and wow the crowd with the cheap effect. Cheesy but cool.

Mark had previously been in a couple other local bands of note: Charlie Don't Surf and Manplanet. He is now performing and recording as Mach FoX. (The photo is of Mach FoX and the fellows are wearing shirts I designed for them.)

Check out Mach FoX at http://www.myspace.com/machfox 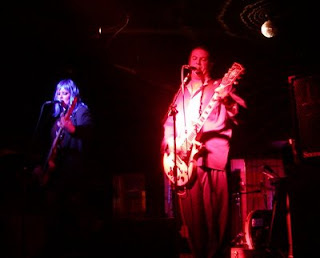 Dander might just be my favorite of the Cold Side bands. They have a strong Pixies influence and are very entertaining in concert. Amy and I have seen them three or four times. Most at the Terminal Bar in Minneapolis or at the Uptown Bar, also in Minneapolis.

Shane the Pain (his stage name) used to work at Cold Side as a lowly shirt folder/counter. He was liked by everyone in the shop and the guys just took to calling him Dander, but he was such a tweaker in those days that had great difficulty doing the easiest task in the shop. He didn't last long.

Check out Dander at http://www.myspace.com/dander 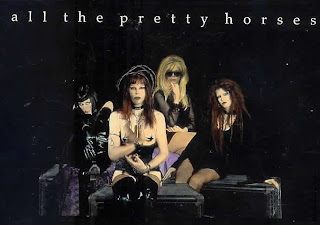 All The Pretty Horses

This is another band that Amy and I saw at more then one location. We've seen them at the Terminal Bar, at some art warehouse party event and other places. We were even both in attendance at Ryan's Corner in St. Paul to watch the band in the days before Amy and I ever met.

All The Pretty Horses could best be described as a loud, theatrical, gender-bending, Glam/Goth rock band. Venus, the leader of the band, is especially intriguing in his/her bending of gender norms. He was born male and still has the plumbing, but he also has a nice pair of A cup breasts. Lee Ann MacDougall, who was the Cold Side connection to the band, would never disclose how he/she got them.

Lee Ann played bass and did some backing vocals. She is the woman with the dreadlocks on the right in the above photo. She left the band in less than pleasant circumstances that I won't discuss here.

Lee Ann was also involved in bands such as Firebrand, Metro Division, and Jehovah's Shitlist (I love that name.). I don't think she's involved in any bands at the moment, but she is still slaving away at Cold Side.

You can check out All The Pretty Horses at http://www.myspace.com/atph 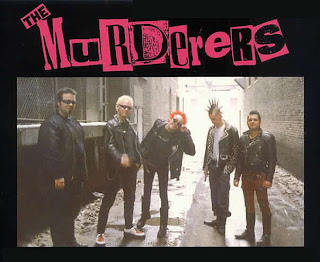 The Murderers were originally from Indiana and, from what I recall, they were pretty big in the Gary, Indiana punk scene. They migrated to Minneapolis and, at one point, three of its members worked at Cold Side. They are pictured above. From the left they are Blake Conway, Dennis Degenerate (That was his band name. I tried to convince him to drop Degenerate and go with his real name, Burns. I thought that was punk enough and didn't seem silly. He didn't listen to me.), and, the incomparable, Bob Murderer. The other two fellows did not work at Cold Side, so screw 'em.

The band was a blast from 1977 with their British-style punk rock. Fast and furious. They were pretty fun and the young punks slammed their hearts out to them.

Bob handled most of the lead vocals. I have a picture of him playing bass that should pretty much give you the idea of his punk cred. He's from New Hampshire, but he sounds like he's from no place on Earth. His accent is so thick at times it is virtually impossible to understand him. Think of Brad Pitt's character in 'Snatch', that's pretty close. Bob is also deaf as a post and drunk nearly all the time. 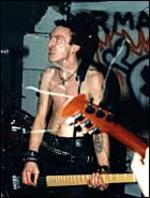 Bob Murderer
The Murderers are no more. Punk is dead.
Posted by jim at 9:16 PM