The Unpleasantness
Pres. Donald John Trump has been impeached.
Well, the majority of the House of Representatives voted to impeach him, but there's an opinion out there that the impeachment process isn't complete until the Articles of Impeachment have been presented to the Senate.
I'm confident the Articles will make their way to the Senate and the Senate will hold a show trial and acquit Donald John Trump. And he will be re-elected. Sorry, that's just how I see it.
I took some time to explain the impeachment process.

Noah Feldman, Barack Hussein Obama, And A Troll On Facebook

A Trump supporting troll took some glee in the technicality law professor Noah Feldman put forward about the impeachment process is not complete yet, because the Articles haven't been handed over to the Senate. Yet.
Folks tried to convince him he was wrong, but he wouldn't budge and he wouldn't cite sources. He did mentioned he posted a citation elsewhere on his page. So, I dug and found out about the technicality. I told the troll I accepted the technicality.
It took a little convincing, but he realized I wasn't arguing with him. He apologized, but he had taken exception to my needling by saying he was a Russian bot. I thought we had a breakthrough.
But then I put a question on my Facebook page asked why people who insisted on referring to the previous president as Barack Hussein Obama, but weren't calling the current one Donald John Trump. There were suggestions of racism and Islamophobia.
Then the troll reared his head again. Name calling and insulting his way to being unfriended and blocked. I'm sure it made his day.

Mentioned On The Show

This being my Christmas show, I thought I should make some sort of mention of the holiday. So, I mentioned my blog on Warehouse Find, the official blog of Nostalgia Zone. Click here for some holiday cheer.
Also mentioned was an op-ed piece posted on Christianity Today's website calling for Pres. Trump to be removed from office. Click here.
Also, also mentioned the Stuck In The 80s podcast did a recent examination of two albums released in 1979: The Clash's London Calling and Christopher Cross' debut album. Click here to give the show a listen.
It's Not True: Another Supposed Gotcha From A Moon Landing Conspiracy Nut 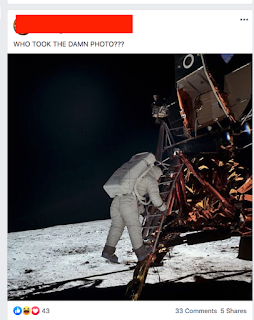 The photo above was shared and a conspiratorial question was asking about who took the picture of Neil Armstrong descending the ladder to the lunar surface.
The answer is very easy and should be obvious. Do you know the answer?
A Dimland Radio Pedantic Moment: The Decade Isn't Over

The '10s may be about to end, but the decade still has a year to go.