We Gonna Be Famous!

Last Thursday was the second Thursday of the month which means it was time for the monthly Minnesota Skeptics Meet-Up. I always look forward to that gathering of mostly like-minded skeptics. However, this past meet-up was particularly interesting.

For that gathering we were joined by a camera crew from the local public television station TPT. They are doing series focusing of various Twin Cities social groups that have regular meet-ups. Travis, one of the organizers of our gatherings, was contacted to see if we would be interested in being on the TV. Well, duh!

It made for an interesting if awkward meeting. We don't normally have cameras and a boom mic hoovering around us. It took some time to get warmed up, but we eventually did. And after we found our footing, the producer had some of us partake in individual interviews. I did my bit, but we all think Tim stole the show.

We were told the segment on us should air in December or January. I'll keep you posted.

Yep, This Is Our President 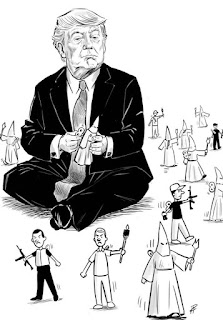 There was some brief talk about the Minnesota Twins' lead in the AL Central slipping away, but then there was the unpleasantness of having to talk about our President. I shard the editorial cartoon you see above and a Trump-supporting Facebook friend of mine tried to shame me for sharing the cartoon in the aftermath of the mass shootings in El Paso, TX and Dayton, OH.

Thankfully, most of the heavy lifting in response to the MAGA member was handled by other FB friends of mine, but I did respond:

"I shared it for two reasons.

"1) I happen to agree, at least in part, that Pres. Trump is presiding over a climate that is encouraging, intentionally or not, the worst of us to act out. He may not be creating those who are acting so hatefully and heinously, but he is winding them up. As is shown in the cartoon.

"2) I think it is a damn good editorial cartoon, both in its artistic skill and ability to make its point.

"Is Trump to blame for the climate we find our country in of late? Is it the media? Is it the Left? Is it the Right? I don't know. It's probably a combination of all those factors."
I also mentioned the tasteless, crude, completely incompetent photo op the Trumps had with victims of those horrible shootings. Talk about tone deaf. And this was before I knew about the photo of that clueless couple with a newly orphaned infant. I think I might have to talk about that image next week.

Look at that. The second PM involving Letterman in as many shows. Huh.

Well, the pedantry had to do with Letterman teasing Pres. George W. Bush having verbal gaffs in public. But, I always thought it was unfair to set up the bit by showing previous presidents making actual speeches and comparing them to moments when W was speaking off script.

But it was nice talking about a man who knew better than to treat meeting with victims of some horrible tragedies as though they were kissing babies campaign stops. Even people who couldn't stand W at the time agree with that notion.


One More Observation On Pres. Trump

Many people had criticized both Pres. Obama and Pres. W. Bush as being teleprompter politicians. They would sound great when reading a prepared speech, but they wouldn't be nearly as good off the cuff. (Funny Letterman didn't continue those Great Moments In Presidential Speeches while Obama was in office.) But, Pres. Trump turns that notion on its ear. He made not be great off script, but he often sounds even worse when reading a prepared speech.

He sounds even more disingenuous.

Three Cool Things
1) The Minnesota Twins turned their second triple play this season in their loss to the Atlanta Braves. Yes, they lost, but a triple play is always cool.

2) The Replacements may never have caught on with the general public, but their musical influence is far-reaching. This video shows the band doing a soundcheck for a show at Maxwell's in New Jersey way back in 1986. These guys were cool.

3) A member of the Minnesota Skeptics said something about my podcast that cracked me up. It helped to keep me humble. And that's cool. I guess.