It's this "Maron Open" thing. After last week's show I decided to write about the Maron Open and Jack Paar for my blog Warehouse Find, the official blog of Nostalgia Zone. In doing my research I found that it might just be that the hosts of The Greatest Generation podcast are the only ones who use the phrase. If so, then it's one of the quirks of the show and not some widespread scourge of the internet meant to drive pedants, such as myself, into flustered tizzies.
But, I have a friend who thinks he has had the phrase elsewhere on the internets. So I guess we shall see.
And I wrote about late night TV talk show pioneer Jack Paar. He's an interesting character who had once walked off his show over the cutting of a joke about a water closet.
You can read my blog here.
Vet Those Memes Before Sharing
On the Facebook recently was a discussion about a certain meme. Which meme it was is not important (since I can't remember it), but it was being used to demonstrated how memes can misinform. A Facebook friend brought up a skeptic sharing a Betty White meme that a quick Google search could show was a lie.
It was one of those quotes with a person's, in this case Betty White, picture thing that leads people to think the person said that quote. Remember, it was Abraham Lincoln who warned us not to believe such memes on the internets. Such a wise man.
I had seen that particular Betty White meme on my Facebook feed, so I decided to do a vetting Google search. And seconds later I discovered Betty didn't say that.
A Dimland Radio Pedantic Moment: I'm Probably OK PSA

There's a radio PSA (public service announcement) called "The Probablys" meant to inform about and discourage buzzed driver. Buzzed driving is drunk driving, because a little bit of alcohol can still impair your ability to drive.
The PSA uses examples of situations in which a person thinks they are probably OK to do some activity. One probably is going swimming without having first waiting 30 minutes after eating. That notion is sort of a myth. It really isn't a big deal. Cramping may be possible, but it's not really a big deal.
But that's not the pedantic moment. Nope. What I was pedantic about was a buzzed driver saying they were probably OK to drive. No, no, no. In my experience that is never something someone who is a little on the tipsy side would say when they were asked whether or not they should drive. Never.

The image is a tasteless joke about waterboarding, which my dark sense of humor can appreciate. But looking at the photo had me thinking someone Photoshopped out the little girl's face. I mentioned as much on the Facebook and that led to a discussion about how photographs can just plain look weird.
The more I look at it I can say the face is there. It's just the way her hair is hanging that makes it look so strange.
I also talked about how people really can't say I know what I saw, because our brains fill in so many details into what we are seeing. And our brains make mistakes. Look at this photo: 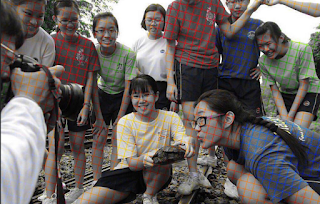 Looks like a color photograph of a group of young people posing with a turtle or tortoise. Looks like it's a color photograph, but it's black and white. A grid of colored lines have been superimposed making your brain perceive the image as being in color.
No, you don't know what you saw.


Movie Recommendation: Roman Holiday (1953)
This a charming romantic comedy starring Gregory Peck and Audrey Hepburn. Hepburn plays a princess who has run away from her overwhelming royal responsibilities. She is discovered by Peck who plays a struggling American journalist scratching out a living in Rome.
At first he thinks shes just drunk, but he takes pity on her. Rather than just let her sleep it off in the streets of Rome, he takes her to his place. He's a gentleman! There's no hanky panky, but he does discover who she is without her knowing.
She keeps her identity from him and he keeps his knowing her identity from her. He smells a big story in this and they spend the day together enjoying the pleasures of Rome. They fall in love, but can it last.
It's very good.
I also mentioned two other Audrey Hepburn films worth checking out Sabrina (1954) with Humphrey Bogart and Charade (1963) with Cary Grant.
Check 'em all out!
Oh, and watch for the typo in the trailer. 10 points if you find it.
This Is Why...

This past week my Facebook feed kept showing me several ads attempting to get people in on the $2 billion judgement against the makers of Roundup weedkiller. It was the decision of juries that the active ingredient glyphosate causes Non-Hodgkin's Lymphoma, a form of cancer. The science on this is solid. Glyphosate does NOT cause cancer, but juries are not usually filled with scientists. In the case of Roundup, these jury members didn't have the expertise in the relative areas of science and they were swayed by lawyers' arguments, not science.
There is hope the judgements will be overturned on appeal.
But there they were ad after ad on my Facebook. Some friends helped me figure out how to stop them for showing up on my feed. I began reporting each ad to Facebook as being offensive. And they truly are offensive.
That got me thinking about why skepticism is so important. We are surrounded by so much bullshit that it can get discouraging, but skeptics need to keep working. We need to keep being the voice of reason to at least stem the tide. It's a Sisyphean task to be sure, but, god damn it, we have to.


Music heard on the show...