Suppose it is eight years ago. Everything is the same as it was then, except the Ukraine/quid pro quo impeachment situation is happening to Pres. Obama. Same allegations, same evidence, same whistle blower, same everything but it involves Obama and not Trump. Pres. Obama is exactly the same as he was, but for the alleged offenses of enlisting a foreign nation to dig up dirt on his most likely opponent in his bid for re-election in return for financial aid for the military needs of Ukraine.
OK? Have you got it?
I ask you Pro-Trumpers: Are you going to claim this is all a waste of time and some kind of a witch hunt after Obama?
I ask you Anti-Trumpers: Are you going to been calling for the ouster of Pres. Obama?
It's just a thought experiment.

I recently stopped listening to the Dead Bodies Podcast, a true crime podcast originating in Australian, hosted by journalists Dee Dee Dunleavy and Sharnelle Vella. I just got fed up. Now, I don't want to discourage people from listening to this otherwise interesting and entertaining podcast, but the near constant interruptions the two hosts engaged in had me exasperatingly yelling expletives at my iPhone. I kept shouting, "Shut the...
Well, I go into more detail on the show. 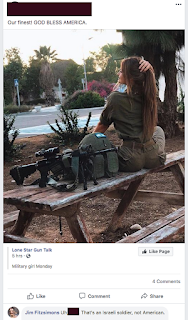 A Facebook friend and old schoolmate of mine shared this image of a quite fetching female soldier. He included a comment suggesting she is a excellent example of America's finest. Except, is she American? If you can look past the big gun and the nice buns, you will find a clue as to which army this young woman belongs, assuming she isn't just a model and is actually a soldier, that is.

I went over several news items (all linked below). An obvious theme emerges.
UK's Music Walk of Fame attraction honors its first musical act.
A world famous musician goes under the knife.
A new documentary examining an infamous concert tragedy and it's aftermath 40 years on will air in December.
Another world famous musician promotes his new novel by being interviewed and answering most Googled questions.
A 1975 film by Ken Russell based on a certain groundbreaking rock opera to be re-released in the UK and a recent review of the film.
Another new song from a new album by a certain legendary rock group to be released in December dropped Friday.
What did your favorite rock band do this week?!

This moment takes place after the show close, so keep listening or go back and listen if you missed it.
I realized I ended the show a couple minutes early so I crammed in another Pedantic Moment. In this moment, I refute the claim in the above image that the cosplayer only had his memories of the original Star Wars film in 1977 to go by when making his costume.
Well, I list a few other sources he could have gone to in those dark days before the internet.
Music heard on the show...