A Cave Tour And A Tale Of BS

It's weird how memories pop into your head sometimes. I was cleaning the other night when the memory of a family road trip to California in 1976. (Correction of error on show: I was 13 during the trip, not 11.) Part of that trip included a visit to the Cave of the Winds (yes, that's what it is called) in Colorado. It was during the tour of the cave when the tour guide stopped the group in a large section and had the lights turned off.
It got very, very dark. We were told it was the darkest dark possible. We were also told of a science experiment done in just such an area of complete darkness. The results of which were told as a little joke for the tour group. And, all these years later, it dawned on me...
That story was bullshit. 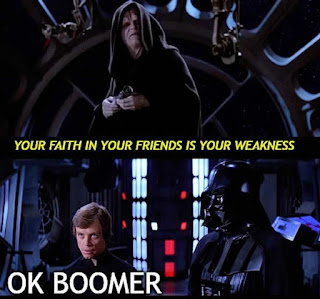 The Millennials are pushing back at the Baby Boomers' incessant insults about how they are ruining everything by using the pithy dis, "OK, Boomer." It's picked up steam and has begun to show up all over the social media and the phrase has even made it's way into the New Zealand parliament.
While talking about the dire importance of taking action to stem climate change, New Zealand MP Chloe Swarbrick was heckled by one of the very few attendees to Parliament. Her response was a brief hand wave and a quick utterance of "OK, Boomer" and she continued with her speech.
Stephen Cobert also weighed in on the OK, Boomer thing. (Correction of error on show: I said Cobert hosts the Late, Late Show. That is wrong. He hosts the Late Show.)

I posted on Facebook about noticing the phenomenon and a discussion was generated. It quickly led to the predictable response "OK, Boomer" when a FB friend stated the phrase is a form of bigotry. That led to the rise of a troll.
I unfriended them and their last salvo was to insult my artistic abilities. The classic move of a troll. I then blocked them. A move that I'm sure made their day. You're welcome, troll. 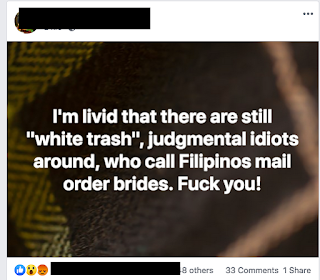 The above meme, other than be an example of a straw man and selection bias, is factually incorrect in its choice of an example of the heroic 18 year-olds of D-Day. That image shows a Russian soldier.
"Class, what is wrong about showing a Russian soldier when referencing the invasion of Normandy? Yes, Dim. Can you tell us?"

A Dimland Radio Science Zero: The House Republicans Of Ohio

Apparently, "God did it" will be considered an acceptable answer in science class in the state of Ohio. The Republicans in the House of Ohio passed a bill that will allow students to not be penalized for getting incorrect answers on science exams if their answers are religion based. Gee, I wonder which religion that would be...
The Ohio Senate is Republican controlled, so this bill has a good chance of becoming law. Might this become  the next separation of church and state case to go to the courts? Will it be the next Dover Panda Trail?

Sir Anthony Hopkins And The No True Scotsman Fallacy

An a la carte Christian (aren't all of them a la carte?) friend of mine triumphantly shared an article posted in January of this year about how actor Sir Anthony Hopkins turned away from alcohol and atheism and became a Christian.
I read the article and followed the links (here to here). I'm not so sure he was ever an atheist.
This raises the No True Scotsman fallacy. It's sort of moving the goalpost by responding when some person does something contrary to the stereotypes of a certain group, in turn putting a lie to the stereotype, that that person never really was part of that group. I know I was coming awfully close to commenting that fallacy.
Hopkins may have been an atheist who turned to the Christian god, but I'm not sure. It was the quote below attributed to him, that made me wonder if he had been an atheist.
"Being an atheist must be like living in a closed cell with no windows."
Hm. Must be like? Not is like?
I would have thought if he had been an atheist he would know what it is like.
He was at an Alcoholics Anonymous (a Christian religion-based group) meeting and he was asked, "Why don't you just trust in God?"
I wonder how triumphant my Christian friend would have fell had the actor been asked, "Why don't you just trust in Osiris? ...Zeus? ...Odin? ...Allah?"

Dimland Radio opening theme song: 'Ram' by The Yoleus
First ad break bumpers: 'Love On A Farmboy's Wages' by XTC & 'You've Got Everything Now' by The Smiths
Second ad break bumpers: 'That's Entertainment' by The Jam & 'Armageddon Days Are Here (Again)' by The The
Closing song: 'Angler's Treble Hook' by $5 Fiddle