A Dimland Radio Pedantic Moment: "These Walls Are Sheathed With Lead."

This moment is something I noticed the most recent time I watched the haunted house classic The Legend of Hell House (1973). I watch this movie most Octobers as part of my Halloween month horror movie viewing tradition. Something occurred to me this latest viewing.

My talking about the this pedantic moment meant I had to do quite a bit of spoiling of the movie. I tried not to give everything away.

It has to do with a secret room, electromagnetic radiation, and lead lined walls.
Bullshit Defending Bullshit

There's a discussion between two of the characters in Hell House. One is Ms Tanner. She's a psychic and she gets upset at Dr. Barrett's skeptical attitude toward her claims. She goes off on a little diatribe and uses the Bible to bolster her argument.

"Yeah, well. The Bible is bullshit, too, Ms Tanner."

An Item For The Gullible 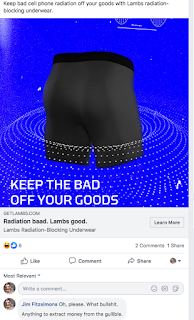 Your cell phone will not hurt your naughty bits. This product is merely an attempt to extract money from the gullible. Just go with Fruit of the Loom or Hanes and stop worrying about cell phones and your junk.

Bride Of Frankenstein Is Not A Horror Film

I prefer my horror movies to be horror and not camp. Bride just doesn't work for me. And the biggest reason it doesn't is Una O'Conner as Minnie.

The camp starts right of the bat with a ludicrously acted prologue meant to catch the audience up on or remind them what had happened in the first film. Then the new story begins. The camp takes a little break when the monster (Boris Karloff) is introduced. The monster is understandably upset and he lashes out at a couple peasants. There is promise that the film could become a monster's revenge against Frankenstein and the people of the village, but as soon as Minnie encounters the monster all pretenses of horror are dropped.
Watch the clip and note the change in the musical score as the scene goes from horror to camp. And watch the way Minnie reacts to seeing the monster had survived the fire. Her reaction is so cartoonish you will wonder if the movie is a comedy.

There are some interesting characters and nice cinematography, but there ain't no horror. Just lots and lots of camp.

However, Neil Gaiman loves Bride, so there's that.

How did they do those shots? Were those performers really putting their lives at risk? Didn't anyone hear the phrase "safety first"?

Well, there was some trickery involved and it's very clever and cool.
Music heard on the show...

Dimland Radio opening theme song: 'Ram' by The Yoleus
First ad break bumpers: 'Delirious' by Prince & 'Since You're Gone' by The Cars
Second ad break bumpers: 'All That I Wanted' by Belfegore & 'Love Is A Stranger' by Eurythmics
Closing song: 'Angler's Treble Hook' by $5 Fiddle